Gentlemen Prefer Blondes (1953) is one of the great Technicolor movie musicals with two famous beauties as the stars. Marilyn Monroe and Jane Russell take over a cruise ship.

I’ve always loved the fantasy life of people cruising on ships in the old days. Dressing up for dinner, meeting all the strangers, and the romance of the sea just get to me. This ship has Marilyn in the best pink dress and Jane dancing with Olympic athletes! 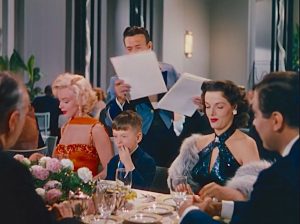 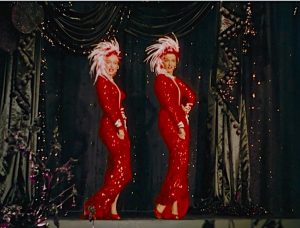 Gentlemen Prefer Blondes (1953) opens with Dorothy (Jane Russell) and Lorelei (Marilyn Monroe) in a big production number. Red sequined dresses, tons of jewelry, and “We’re just two little girls from Little Rock.” Afterwards, Gus Esmond presents Lorelei with a big diamond. Lorelei is going to Paris on the Ile de France and Gus will join her and get married there. Dorothy goes along as Lorelei’s chaperone. 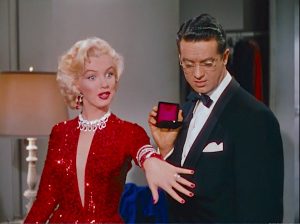 “Is it the right size? –Oh it can never be too big! Do you think it’s too small, Dorothy? –Looks like it ought to have a high ball around it!” – Gus, Lorelei, and Dorothy

Boarding the ship, Dorothy is thrilled to see that the US Olympic team is also sailing. 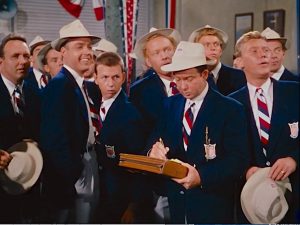 “You’re supposed to be the chaperone on this trip. –Now let’s get this straight, Gus. The chaperone’s job is to see that no one else has any fun. But nobody chaperones the chaperone!” – Gus and Dorothy

A detective, Ernie Malone (Elliott Reed), also boards the ship. His job is to spy on Lorelei.

“I keep telling her, it’s just as easy to fall in love with a rich man as a poor man. She says, yes, but, if they’re tall, dark, and handsome, she never gets around to vital statistics until it’s too late!” –Lorelei

Dorothy discovers that the team has to stay in training during the voyage. She bemoans how busy they are in a wild scene with half-clad men in the gym, Is There Anyone Here for Love. 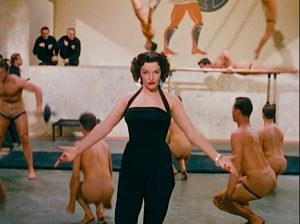 Dorothy meets Sir Francis “Piggy” Beekman (Charles Coburn) at a cocktail party. Piggy owns a diamond mine, the second largest in South Africa. Dorothy advises him not to tell Lorelei about the diamonds. Dorothy and Ernie hit it off while Lorelei dances with Piggy. 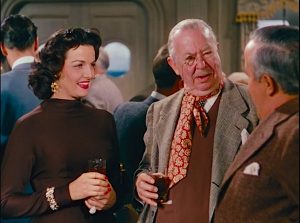 “You might be interested in my tiara. I always carry it with me, afraid to leave it in the stateroom. –And you’re not afraid to show it to Lorelei? –Stop, Lady Beekman won’t know you’re teasing. –Look, did you ever, anywhere, anything like it? –All blue stones, cozy little job, what? –May I just hold it just for a minute?” –Lady Beekman, Lorelei, Piggy, Dorothy 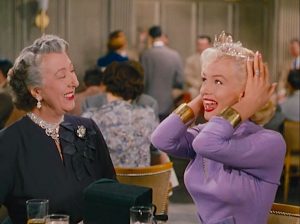 Ernie and Dorothy are developing a true romance until Dorothy catches him spying on Lorelei and Piggy. The girls hatch a plot to get his incriminating photos back before Gus sees them. 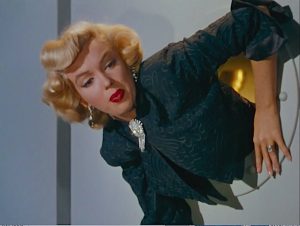 The costumes for Dorothy and Lorelei are amazing and glamorous. They include jewels, brocade, décolleté, bustles, and more. 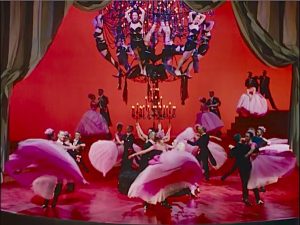 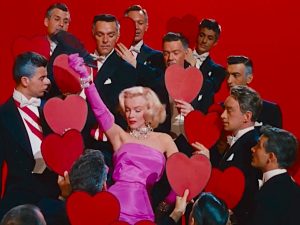 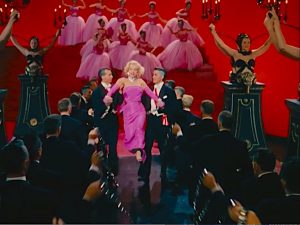 “But square cut or pear shape / These rocks don’t lose their shape / Diamonds are a girl’s best friend / Tiffany’s / Cartier / Black Star Frost Gorham / Talk to me Harry Winston, tell me all about it” –Lorelei

Give Gentlemen Prefer Blondes a try for an enjoyable 1950s musical with the enchanting partnership of Marilyn Monroe and Jane Russell. 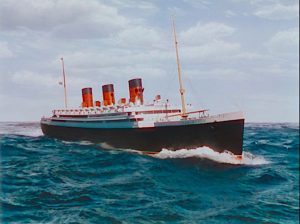