Eve’s Christmas (2004) begins with Eve running out of her fabulous condo in New York to catch a cab to her Madison Avenue office. She is pitching an ad campaign to Cumberland Wines. She’s got a fabulous city single life. 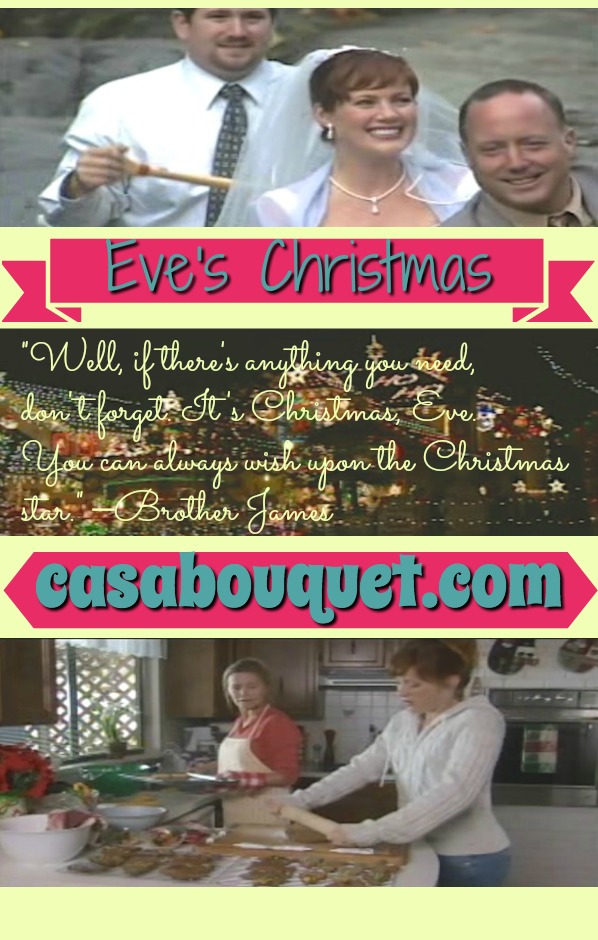 Eve’s assistant is Mandy (Erin Karpluk), her best friend since childhood. Her boyfriend is the owner of the ad agency, Neil Barlow (a blond Kavan Smith!), a married man.

“I’m the girl in the office that all the wives hate. I’m the other woman! …People have relationships all the time. What is wrong with me? I have talent, I am an artist!” –Eve

Eve is not happy. She was once supposed to get married on Christmas, so she hates the holiday. She hasn’t gone home to see her family in Oregon for 8 years.

She meets a man begging on the street.

“Ya got something on your mind? –Yes, yes, I do. I’d really like to go home. To have a merry Christmas. –Well, if there’s anything you need, don’t forget. It’s Christmas, Eve. You can always wish upon the Christmas star.” –Brother James and Eve

Eve goes home alone to watch video of her last Christmas at home. She wishes on the Christmas star to have the chance to go back and make things turn out differently. She wakes up in her childhood bedroom in 1996.

Eve tries to go through all the events of the week leading up to her planned wedding when she was 24. Her cell phone is huge, she has to go to see her wacky wedding dress designer, and she eats cheese fries at the diner. No one knows what Pilates is.

A cute romantic scene shows us what Eve has lost. She is with her friends at karaoke and her fiancée, Scott (Sebastian Spence), gets up to sing a very romantic tribute to her.

Eve gets fired from a barista job. She is happy to see her kind and cheerful parents (Cheryl Ladd and Winston Rekert), but she is really struggling with which life she really wants, her old one with Scott in Oregon, or her new one in New York.

“Do you have any idea of the kind of sacrifices I’ve had to make so that you can get your little second chance? –Sacrifices? – Darn straight, sacrifices. I don’t even get an intern, you know that? They expect me to do all of this by myself. Who ever heard of a guardian angel without an intern?” –Brother James and Eve

Some great comedy is added with Eve’s wedding planner and her very wild ideas. The actual wedding is my favorite Christmas movie wedding. The bride arrives in a canoe paddled by two groomsmen. Her father stands at the dock to help her out. Eve and Scott marry by the river with snow gently falling.

“When Eve first said she said that she wanted to get married on Christmas, I thought she was nuts. Completely. But if anyone knows anything about the spirit of Christmas, it’s Evie.” –Mandy

Add Eve’s Christmas to your holiday movie rotation if you like romance with comedy, fantasy time travel, and a Christmas wedding.