Destry Rides Again is a Western gem from 1939, a wonderful little jewel of a story with great stars, a superior supporting cast, and wit to spare. It was a banner year for the movies. 1939 contained many of the blockbuster classic films of the mid 20th century. The Wizard of Oz, Gone with the Wind, Gunga Din and The Women were made during that very creative year, just to name a few.

Destry Rides Again is considered to be Marlene Dietrich‘s comeback film and it cranked up her box-office appeal to a new level. Marlene plays Frenchy, a worldly-wise saloon girl, with all the smoky vigorous spirit that only she can deliver. Her co-star is Jimmy Stewart, playing Thomas Jefferson Destry, Jr., a quiet man who speaks slowly and loves to tell witty tales.

The setting is the dusty little town of Bottleneck, where life revolves around the Last Chance Saloon. Kent (Brian Donlevy) owns the saloon and uses it as his headquarters for controlling the town. Frenchy (Dietrich) entertains the boys but also helps Kent execute his dirty deals. 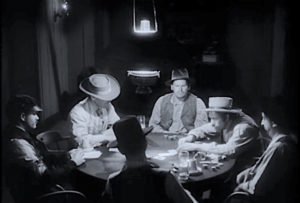 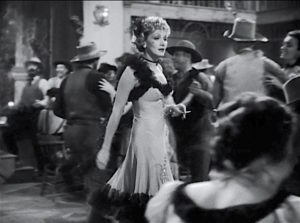 The mayor of Bottleneck is corrupt, and he and Kent and the saloon gang devise a scheme to swindle land from surrounding ranchers. The idea is to buy enough land so that any cattlemen crossing it will have to pay a toll to Kent and his cronies. Kent and the mayor decide to make bumbling old Washington Dimsdale (Charles Winninger) the sheriff, certain that “old Wash” will never have the brains to investigate any of their dealings. 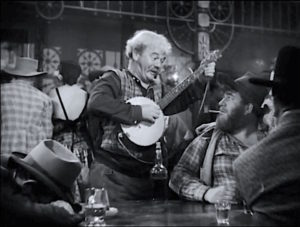 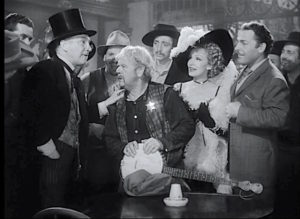 But old Wash throws a monkey wrench into the situation by taking his appointment seriously. He knows he can’t be an adequate sheriff by himself, so he sends for his old pal Destry (Stewart) to act as deputy sheriff. Tom Destry is smart, perceptive and believes in talking things out rather than quick-drawing his pistol (an interesting mind-set for a gunslinger, especially considering the world situation when the film was made in 1939.) 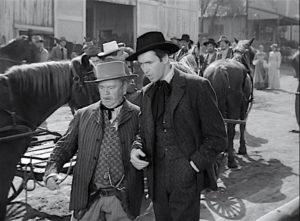 “How can you talk of eatin’ at a time like this? –Cuz I’m hungry.” –Wash and Destry

Comic relief is provided by the Callahans, owners of Bottleneck’s only hotel. Boris, the husband has a Slavic name that no one can pronounce, so his wife Lily Belle (Una Merkel) calls him ‘Callahan,’ the name of her late husband. 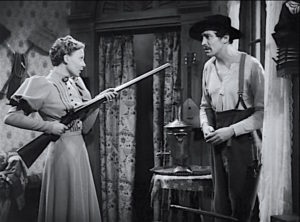 Callahan has a hard time staying away from the gambling tables and his wife is constantly on his case. A cat fight between the righteous Mrs. Callahan and Frenchy is a memorable scene — way over the top — and Marlene throws herself completely into it. 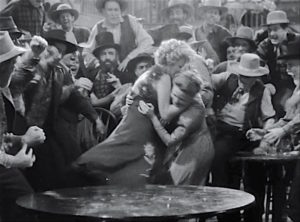 The lyrics for the saloon songs in the film were written by Frank Loesser (Guys and Dolls and How to Succeed in Business without Really Trying.) Fans mailed more letters requesting the music from this film than for any musical made to date. Marlene does a grand job entertaining the boys, bringing her Berlin-cabaret style to the old West. She is the glittering satin cowgirl, rhinestones and sequins everywhere. Her crop glitters, her holster glitters, even her hair glitters. 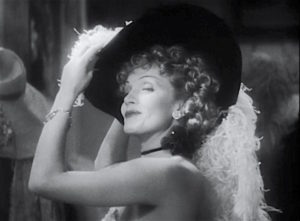 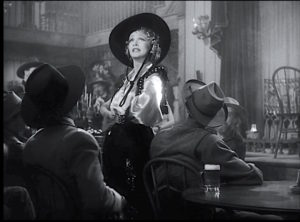 Destry Rides Again is a highly entertaining film, both as an example of the Western genre and for the outstanding performances of Jimmy Stewart and Marlene Dietrich. So slide on out to Bottleneck and get acquainted with this great classic movie. 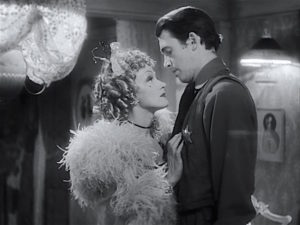