Call Me Mrs. Miracle (2010) is based on a novel by Debbie Macomber. It’s a sweet, romantic fantasy story of how a little boy’s Christmas wish comes true.

It’s Christmas in New York City. Gabe is a ten year old who lives with his Aunt Holly (Jewel Staite). His widowed father is deployed overseas, so single Holly is learning how to be a mom. 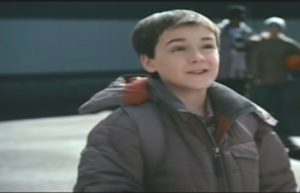 “Dad and I always eat cereal for breakfast. …He doesn’t usually let me have Mega Puffs. –Why? –He says the first ingredient in this cereal is cavity.” –Gabe and Holly

A young man, Jake Finley (Eric Johnson), heir to a great department store Finley’s, is plagued by the must-have Christmas toy, Intellytron robot. He has promised his father that he can make a profit in the toy department by emphasizing more traditional toys. He didn’t order any Intellytrons. 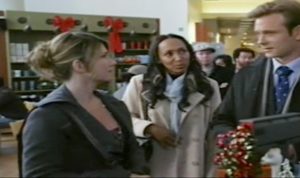 Holly works at the Lindy Lowe fashion house. She comes up with the marketing for Lindy (Lauren Holly), a very difficult boss, almost like Cruella deVille. Her dream is to be a dress designer, but Lindy is not supportive of her aspirations or her suddenly being a single mom. 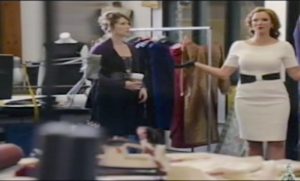 Jake has a new employee, Mrs. Miracle (Doris Roberts), who seems to have just appeared. She says her name is Mrs. Merkel, but they made her nametag wrong. 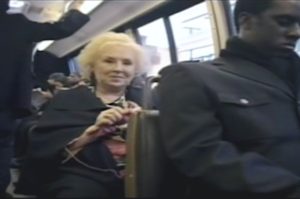 “And the funny thing is, is I don’t remember getting a call from human resources about you. –Oh well I’m just here to help you save Christmas! And the toys are just flying off the shelves!” –Jake and Mrs. Miracle

Lindy goes on a shopping channel to sell her fashions, which only go up to size 8. Holly always tries to get her to make clothes for normal women.

“You used to spend your days working alongside your employees. Now you don’t come out of your office. You can’t expect to know all your employees if you don’t interact with them. And they miss you!” –Mrs. Miracle

Mrs. Miracle helps everyone. She helps Lindy realize she can sell her fashions to size 16 women. She gets Mr. Finley together with one of his long time employees, Gloria. She sets up situations for Jake and Holly to bump into each other. And she campaigns vigorously for Mr. Finley to reinstate the employee Christmas party.

“And tomorrow, in honor of our military, Finley’s will give a portion of the proceeds of every toy sold to children whose parents are in the military. So come be a part of the real true meaning of Christmas and give back. Remember, the happiest people are people who bring happiness to others.” –Mrs. Miracle

One of the most charming things about this movie is the music (James Jandrisch). It has lots of percussion instruments, bells, and hand claps and truly adds to the film.

I miss Doris Roberts. She was so great in Remington Steele, Everybody Loves Raymond, and National Lampoon’s Christmas Vacation (1989). She created this sweet role in Mrs. Miracle (2009).