Bus Stop (1956) opens with Virgil (Arthur O’Connell) and Bo (Don Murray) practicing steer wrestling for the rodeo in beautiful Montana. Bo is the very young owner of the ranch and Virgil is his top hand. They get on a bus to ride from Montana to Phoenix for the big rodeo. 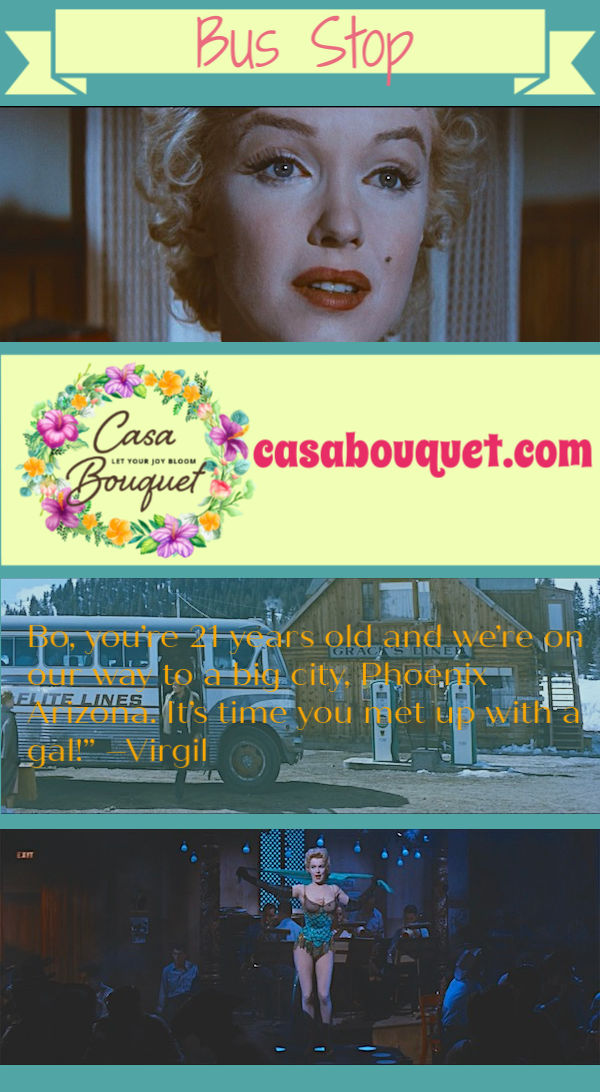 Oh for the old days! As the bus travels through the night, everybody sings folk songs together with Virgil on guitar.

Bo shows his over-the-top personality on the bus ride to Phoenix. He’s loud and country.

“I wouldn’t set my sights too high if I were you, Bo. You just figure on picking out some plain looking little old gal with a cooperating nature and a good personality. I mean, we gotta be realistic.” –Virgil

In Phoenix, the Blue Dragon is across the street from the hotel. Virgil spots Chérie (Marilyn Monroe) in the window and decides to go to the café. Chérie is a chanteuse from the Ozarks. She is trying to work her way to California. Her job is to hustle drinks from the clients. The management lets her sing with the band occasionally.

Chérie’s performance of Old Black Magic is full of pantomime and doesn’t keep the crowd from talking. When Bo arrives he forces everyone to listen to her.

“But meanwhile, for a wedding present, I’m gonna get you a deepfreeze, or an electric washer, or any other major appliance you want!” –Bo

You might ask why Chérie’s skin is so white. Monroe wanted her character to look like she never spent any time in the sun. Another question is, why is her costume so tattered? Monroe wanted the outfit to look like it was the only one Chérie had and it had been mended many times.

The next morning Bo kidnaps Chérie from her boarding house and takes her to the parade. All she can think of is running away from him. The parade has all kinds of floats and units with marching girls with 6 shooters, Hopi dancers, and Daniel Boone outfits.

Chérie doesn’t realize how serious Bo is about marrying her until she sees a preacher in the stands. Vera (Eileen Heckart) and Chérie run away and Bo searches Phoenix for her. Virgil finds her at the Blue Dragon café and tells her he’s not in favor of the marriage. Virgil, Vera, and Chérie come up with a plan for her to escape. Bo comes in and he’s all happy because he’s won the rodeo and a lot of money. Poor Chérie ends up on the bus to Helena.

A terrible snow storm stops the bus at Grace’s Diner, an official bus stop, and can’t go on. The people inside are trapped and Bo might as well be a wild toddler for all the self control he has about Chérie.

Bus Stop showcases a luminous performance by Marilyn Monroe and a wonderful cast. Try this sweet comedy romance of unsophisticated souls finding each other in the West of the 1950s.