You are here: Home / Culture / A Boyfriend for Christmas: Lisa’s Home Bijou

A Boyfriend for Christmas (2004) starts with Holly Grant (Kelli Williams) as a sweet girl in middle school in the 1980s. She is the only one with no boyfriend. She’s with her friends at a Salt Lake City mall when she sees a boy having trouble with his little sister at the Santa village.

“I’m too old for toys. –It’s okay. You don’t have to be a child to believe. –I’d like … I’d like a boyfriend for Christmas. –Are you sure you’re ready for a boyfriend? –I don’t know. I think so. –Well when you’re really ready, Holly, you’ll know. And I promise you that I will send you just the right one.” –Holly and Santa

Under the tree she gets a special snowglobe with Santa inside and a special inscription.

“A promised gift will come my dear / A love that’s true and steady / Between now and the end of the twentieth year / when two hearts are ready.” 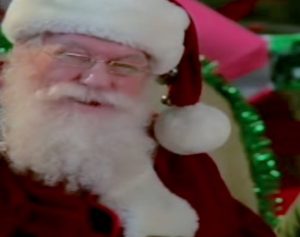 Twenty years later, Holly is in court representing two foster children. She is trying to return the children to their mother for Christmas, but Ryan Hughes, the mother’s lawyer, has not shown up. Ryan is at the office, trying to convince his client that a big redevelopment project still can support the people with low-income. The children get returned to foster care.

Holly decides to write Ryan a very nasty letter. Holly and her friends meet her mother for lunch. Holly’s old boyfriend, Ted, has come back to town and her mother wants her to resume with him.

Holly goes to the shelter Christmas tree lot with her friend Beth. Ryan (Patrick Muldoon) managed to get the children returned to their mother and he is volunteering at the tree lot. Ryan hears Holly dictate a letter telling him how awful he is. She has a mysterious encounter with Santa (Charles Durning) that makes her wonder. 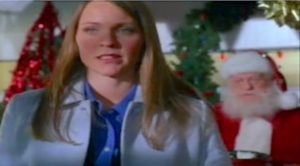 Back at the office, Ted arrives and tells her he loves her.

“I’m not looking for a relationship right now. Especially not a recycled one.” –Holly

Santa sends Ryan to Holly’s house with a Christmas tree. He is her boyfriend for Christmas. He lies about his name because he knows how mad Holly is at Ryan Hughes. So he is “Douglas Firwood.”

Holly brings Ryan to her parents’ house for Christmas Day. They are all surprised and were expecting Ted. He joins right in assembling children’s toys, watching football, playing Twister, and helping cook.

Holly and Ryan spend a lovely Christmas evening together at her house. When Doug/Ryan goes out to get breakfast, Ted shows up to keep up his pursuit of Holly.

“Alright, so let me get this straight. A stranger shows up at your house dressed as a present from Santa. He makes you breakfast, he charms your family, spends the night, batters your ex-boyfriend with a bag of doughnuts, then disappears? Is that it?” –Beth

Holly can’t figure out how to contact Doug/Ryan or who actually sent him to her. Meanwhile he goes back to shelter to talk with Santa about volunteering more.

Holly brings her snow globe to Santa to ask about her boyfriend present. She thanks Santa for her present and asks if Doug can be her boyfriend for the rest of the week.

“Did you happen to send me a love that’s true and steady? –Only you can answer that my dear. But I can tell you this, souls meant to be together cross paths when, like the verse says, two hearts are ready. But if you fail to recognize the magic of that moment, it will pass.” –Holly and Santa

Doug/Ryan repeatedly tries to tell Holly the truth about who he is and he knows how much Holly hates deception, but he is thwarted many times. Will Ryan become a partner in his law firm? Will Holly figure out the one she really loves?

“Secrets? –Yeah. –Do you believe in keeping secrets? –Yeah. No, no, no, no, not between each other. Not between…you know what I mean. –Good. Because after what I’ve been through with Ted it would be impossible for me to fall for someone who wasn’t completely honest.” –Holly and Ryan

Some Christmas movie memes in A Boyfriend for Christmas include the heroine being a champion ice skater and a family touch football game. Have any of you had a man fall madly in love with you after watching you skate?

One crazy thing I actually love about this movie is the way everybody drives around Salt Lake City in December with the tops down on their convertibles.

Shannon Wilcox who plays Holly’s mother, is Kelli Williams’ real mother! Martin Mull plays the dad just the way you would want your dad to behave if you brought a new boyfriend home. And Charles Durning’s portrayal of Santa is one of my favorites. I love the scene in A Boyfriend for Christmas where he visits the ice skating rink on New Year’s Eve.

Resource links for A Boyfriend for Christmas