White Christmas (1954) is a favorite Christmas musical for so many people. This is another classic that doesn’t really need a review. Being over 60 years old, I think it’s time for an annotation for younger viewers. Here’s my take on some of the sayings and culture in White Christmas that might need some explanation.

The film begins on Christmas Eve 1944 in a bombed out area in Europe. Bob Wallace (Bing Crosby) and Phil Davis (Danny Kaye) are starring in a show for their fellow troops. Bing sings White Christmas. 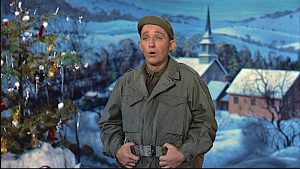 During a bombing attack, Davis saves Wallace from a falling wall.

After Victory in Europe Day, Wallace and Davis team up and become a hit. It’s December and they’ve brought their Broadway show to the Florida Theatre, a historic theater in Jacksonville.

Phil keeps trying to set up Bob with dates. One chorus girl is the great dancer Barrie Chase. She was well known on TV in the 1950s and 60s and made several specials with Fred Astaire. 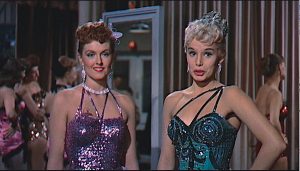 “Well I like that! Without so much as a kiss my foot or have an apple!” –Doris

Bob and Phil pack their trunks for their train trip to New York. We don’t see these trunks for travel today since everyone tries to not check luggage. But I’ve always longed to have one of these trunks. You can see the special hangers that allow them to hang their clothes on racks in the trunk. All the special compartments for hats and accessories, and drawers! https://www.apartmenttherapy.com/quick-history-trunks-137590

“Ever since the day we became producers you’re a changed man. You’ve gone absolutely beserk with work. And the strange thing is you like it. You like being Rodgers and Hammerstein.  –Well it was your idea you know. – Well sure it was my idea but I didn’t think I was going to create a Frankenstein. From that day on I haven’t had one minute I could call my own. –What do you want me to do about it? –I want you to get married. I want you to have 9 children. And if you only spend 5 minutes a day with each kid, that’s 45 minutes! And I’d at least have time to go out and get a massage or something!” –Phil and Bob

Bob and Phil go to Novello’s supper club to watch a sister act. The girls are sisters of one of their old Army buddies, Bennie Haynes, the original Alfalfa from the Our Gang comedies, Carl Switzer (he has a small part in the school dance scene in It’s a Wonderful Life.) https://www.metv.com/lists/13-things-you-never-knew-about-the-little-rascals 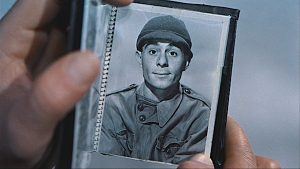 Novello’s would be a dream date place for me, open to the Florida sky with entertainment, dancing, and a huge seafood buffet. The women are dressed in beautiful cocktail dresses and the men all look sharp. 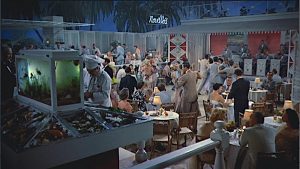 Betty (Rosemary Clooney) thinks her sister Judy (Vera-Ellen) is responsible for Wallace and Davis coming to see their act. 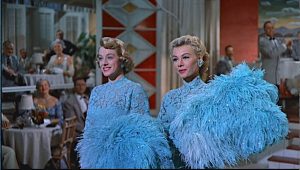 “Judy, did you read mother’s letter this morning? –No, why? –Bennie’s got a job in Alaska. He’s been out of the country for three months.” –Betty and Judy

In 1954 Alaska was a territory and considered “out of the country.”

Betty and Judy Haynes come out on the floor to do their signature number, Sisters. 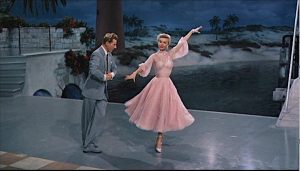 The girls have to leave in a big hurry because of an unscrupulous hotel owner and Phil gives them his train tickets. Bob and Phil end up doing their act by lip synching with a record. http://www.vinyland.com/index.php?main_page=vinyl&language=en 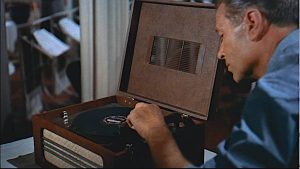 “All kinds of weather/ we stick together/ the same in the rain or sun/ two different faces/ but in tight places/ we think and we act as one.” 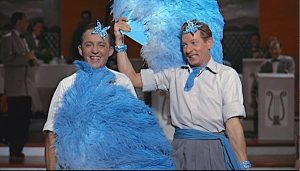 Once Bob and Phil make it to the train, they find out their drawing room is taken and they will have sit up all night in the club car. The drawing room has beds while the club car has a bar and booths. The sisters join them and they order lemonade, malts, and club sandwiches.

“It means we’re going to Vermont. It might not be bad at that, you know, the snow covered slopes, the skiing, Christianas, and the stemming and the blatzing and schussing, hot buttered rum, light on the butter. And snow!” –Bob

A Christiana is a turn made with the skis parallel. Stemming is slowing down, like a snowplow. Schussing is fast skiing without making turns. Sorry you all, I can’t figure out if he is saying platzing or blatzing and I can’t find a ski term for either one! Hot buttered rum is a winter drink that may date back to the 1600s. http://www.americanfoodroots.com/features/holiday-drinks-hot-buttered-rum/

When the train pulls into Pine Tree, Vermont, the girls are staying in a Pullman car. https://www.smithsonianmag.com/arts-culture/traveling-style-and-comfort-pullman-sleeping-car-180949300/

Bing Crosby first introduced White Christmas in the film Holiday Inn. The Columbia Inn in this movie is a remodel of the inn in Holiday Inn. I love all the Alpine wood and stone and the wonderful fire in the middle of the lounge. 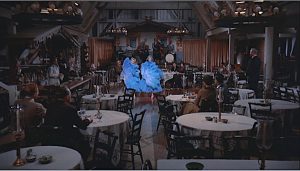 Emma (Mary Wickes) greets the gang at the front desk. Mary may be familiar to you from the Sister Act movies (also Now, Voyager). 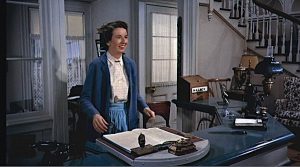 General Waverly (Dean Jagger) comes in with his granddaughter Susan. Bob and Phil think he’s a janitor until he reveals that he owns the inn. He tells them he’s on KP. This is a term from the military meaning Kitchen Patrol duty.

“Emma, couldn’t you talk him into letting us work for half salary? –Not Light Horse Harry! Advance, advance, never retreat! He’s advancing right into bankruptcy!” –Betty and Emma

The big production number Mandy is a tribute to minstrel shows. Mandy was a big hit for Irving Berlin in 1919. This 1950s movie thankfully did not use blackface, but it is still celebrating a historical American entertainment that cemented racial stereotypes. Mr. Bones was one of the members on the end of the minstrel group who would lead jokes. Mr. Interlocutor was the master of ceremonies. Georgie Primrose owned a minstrel company popular during the 1870s and 80s.

Betty’s black sequined gown with touches of red is so beautiful. This number is where we first spot George Chakiris dancing. He later went on to stardom in West Side Story and the Route 66 TV series. 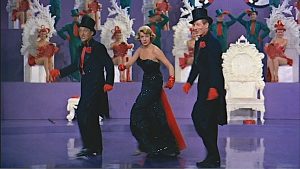 Phil and Judy scheme to get Bob and Betty together for a late night snack.

“We got New England blue plate or the Vermont schmorgasbord. Not as classy as Toots Shor’s probably but I think you’ll find the price is right.” –Bob

The blue plate special was very popular in early 20th century diners and café’s. It was the cheapest special of the day, often something like meatloaf or chili with sides, served on a blue divided plate. A schmorgasbord is an old Swedish tradition, a buffet with cold and hot dishes, including sandwiches. When I was young, there was almost always a schmorgasbord restaurant in any ski resort I visited. Toots Shor was a famous Manhattan restaurant in the 1940s and 50s. It was a celebrity hangout with simple American food. 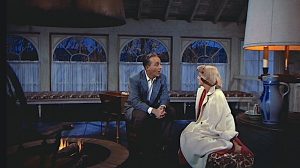 General Waverly reveals to Bob that he is looking for an active duty posting with the Army. The US was part of the Korean War from 1950 to 1953. General Waverly, like other World War II veterans, is hoping to be assigned to active duty. https://www.newsweek.com/us-forget-korean-war-led-crisis-north-592630 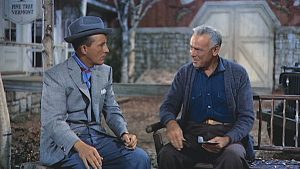 The older men play horseshoes at the inn. General Waverly thinks he’s too young to play until the Army turns him down. This is an old, old game that became popular in the US after the Civil War. http://www.horseshoepitching.com/historical-horseshoes/

Phil rehearses the Choreography number with the chorus line and Judy. The women are dressed in gray with high ponytails and lyrical sandals. Students of modern dance history will immediately recognize that this number is a parody of contemporary dance legend Martha Graham. The Martha Graham Studio began in 1926 with a style of modern dance that broke away from ballet. http://www.marthagraham.org/history/

The Ed Harrison TV Show is a copy of the real life Sunday night show Ed Sullivan. Ed Sullivan was a famous New York sports and entertainment reporter who began a variety show that ran for 23 years. His show included scenes from Broadway musicals and musicians such as Bo Diddley, Buddy Holly, Elvis, and the Beatles. http://www.edsullivan.com/show-history/

“Put the show on the whole network right from Pine Tree. Play it up big, a real Christmas Eve show. All about how you’re playing Santa Claus to the Old Man. You know, plenty of schmaltz, lots of heart.” –Ed Harrison

Phil and Judy try to get Bob and Betty together by faking an engagement.

“I mean, I’m not exactly repulsive. –Of course not. –And you do find me gay, amusing, good company, fun to be with? –I do, but I feel the same way about my cocker spaniel.” –Judy and Phil 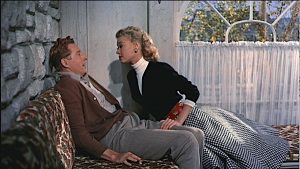 The cast party has hors d’oeuvres, coffee, and lots of smoking. Betty has a beautiful dark green velvet cocktail dress. 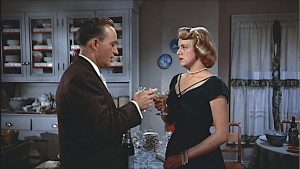 Bob arranges to meet with Ed Harrison at the Carousel Club in New York, where Betty is the headliner. She has a spectacular mermaid black velvet gown with sparkle accessories for her song. You may notice a young woman with a short pink costume and a tray going around the club. In the old days, clubs would have women come to the tables to sell items such as cigarettes, flowers, and photos. 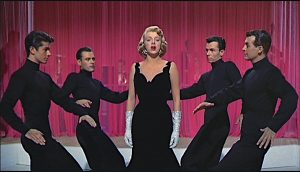 “I’ll have you court-martialed! –Susan, you’re not obliged to go. They haven’t done much for you, hardly anything. –Emma, I’ll make my own decisions. I got along very well in the Army without you. –It took 15,000 men to take my place!” –General and Emma

Bob and Phil put on a big Christmas Eve show for General Waverly. Many of the men from the General’s Division make the trip to Vermont to celebrate.

“Gee I wish I was back in the Army / The shows we got civilians couldn’t see / How we would yell for Dietrich and Cornell / Jolson, Hope, and Benny all for free” –Bob and Phil

Irving Berlin songs in White Christmas include: White Christmas, The Old Man, Heat Wave, Let me sing and I’m happy, Blue Skies, Sisters, The Best Things Happen While You’re Dancing, Snow, Mandy, Count Your Blessings (Instead of Sheep), Choreography, Abraham, Love You Didn’t Do Right By Me, What Can You Do with a General?, Gee I Wish I Was Back in the Army

Make yourself a hot buttered rum and a club sandwich and enjoy White Christmas this holiday season. 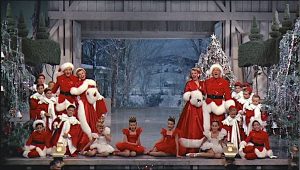