Miracle on 34th Street (1947) is a clever fantasy Christmas film. It’s been shown on TV so many times it doesn’t really need a review. I think it’s time for an annotation for younger viewers since the film is now 72 years old. Here’s my take on some of the sayings and culture in the movie that might need some explanation.

The overall premise for Miracle on 34th Street is that Santa Claus lives in New York and lives in a retirement home. The story was written by Valentine Davies (The Glenn Miller Story, The Bridges at Toko-Ri, It Happens Every Spring.)

Most of the action takes place around the Macy’s store in Manhattan, from Thanksgiving to Christmas. Macy’s is on 34th Street. R.H. Macy founded his first New York store in 1858. In 1902, the store at Herald Square (34th and Broadway) became the flagship for the company. Macy’s began sponsoring the Thanksgiving Day parade in 1924. The large balloons in the parade began in 1927. 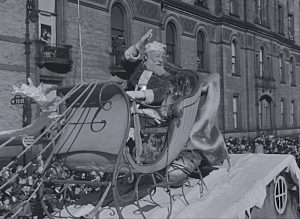 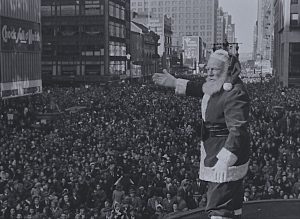 An old man (Edmund Gwenn) stops by a store window to watch the Christmas display being arranged. It’s a jewelry store that sells fine china and other fancy home goods. I think we only have one jewelry store left in my town that looks like this. The names Kris Kringle uses for the reindeer in the display come from the 1823 American poem by Clement Clarke Moore, A Visit from St. Nicholas. 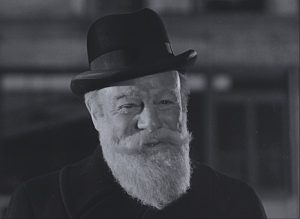 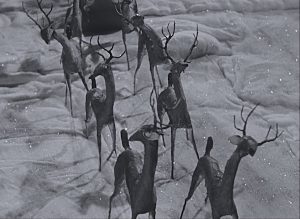 “And I want to thank you for being so kind to Susan. Cleo tells me that you took them to the zoo yesterday. –That’s right. But I must confess that it’s part of a deep dyed plot. I’m fond of Suzy, very fond, but I also wanted to meet you. I read someplace that the surest way to meet the mother is to be kind to the child.” –Doris and Fred

Doris (Maureen O’Hara) is a divorced working woman with a little girl. That would not be remarkable today, but it really was in the 1940s. After World War II, mothers were expected to stay home with their children. If you saw a single mother, she might be likely to be a war widow. Doris has a middle management job at Macy’s, quite an achievement in those days. 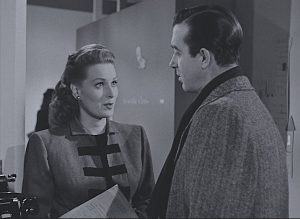 This was Thelma Ritter’s first movie, as the mother looking for a fire engine. She is one of my favorite character actors. Some of her films are Rear Window, Pillow Talk, and The Model and the Marriage Broker. 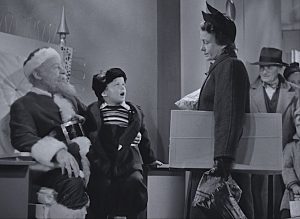 “Oh, I keep track of the toy market pretty close. Does that surprise you so?  –Surprise me? Macy’s sending people to other stores. Are you kidding me? Well the only important thing is to make the children happy. Whether Macy or somebody else sells the toy doesn’t make any difference. Don’t you feel that way?” –Kris and desperate mother

Natalie Wood (Suzy) was 8 years old in this movie and she steals the show. What a great stink eye! She really makes the transformation believable, from little girl who doesn’t believe in fairy tales, to one who thinks she can get her dreams. 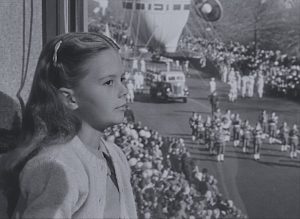 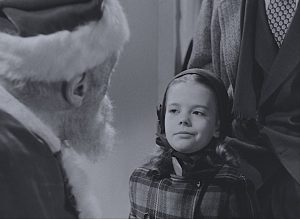 Suzy watches a little Dutch war refugee visit Santa. Kris speaks Dutch with the little girl and sings a Christmas carol. Many Jewish children were sent out of Nazi occupied countries to safety in Allied countries, along with many children who lost their parents in Holland, Belgium, Poland, and other European countries. In the US, money was raised for war orphans and many children were adopted.

“Oh, Christmas isn’t just a day, it’s a frame of mind. And that’s what’s been changing. That’s why I’m glad I’m here. Maybe I can do something about it.  And I’m glad I met you and your daughter. You two are a test case for me. –We are? –Yes, you’re sort of the whole thing in miniature. If I can win you over, there’s still hope. If not, I guess I’m through.” –Kris and Doris

Kris gets Mr. Walker in Human Resources very upset during his psychological fitness test. Dr. Pierce from the Home for the Aged comes in to vouch for Kris.

“Why there are thousands of people walking around with similar delusions, living perfectly normal lives in every other respect. A famous example is that fellow, well I can’t think of his name, but for years he’s insisted he’s a Russian prince. Now there’s been all kinds of evidence to prove him wrong but nothing has shaken his story. Is he in an institution? No. He owns a famous restaurant in Hollywood and he’s a highly respected citizen.” –Dr. Pierce

Romanoff’s was a popular Beverly Hills restaurant hangout for the stars. The owner, Michael Romanoff, told the world he was a nephew of Tsar Nicolas II, even though he started life as an Eastern European bluecollar worker.

After the fitness test, Doris and her colleague decide to keep Kris in town so they can keep an eye on him. Fred sees a chance to get closer to Doris and Suzy and invites Kris to stay with him. 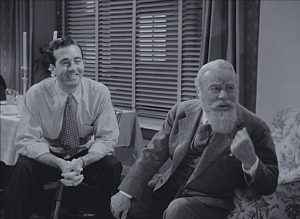 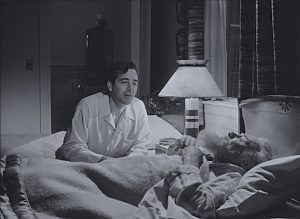 “All my life I’ve wondered something and now’s my chance to find out. I’m going to find the answer to something that’s puzzled the world for centuries. Does Santa Claus sleep with his whiskers outside or in? –Always sleep with ‘em out. Cold air makes ‘em grow.” –Fred and Kris

Macy’s starts keeping track of what is available at competitors. The stores mentioned are Gimbels, Bloomingdale’s, Hearns, Stern’s, and McCreery. The film shows the full-page ads with great advertising graphic art.

Suzy is very good at blowing bubbles with her bubblegum. In fact, she hoards chewed pieces in her nightstand! The first bubblegum was invented in 1928, Dubble Bubble from Fleer.

Kris befriends a teenager who works in housekeeping for the store. Kris gets very angry when he finds that Mr. Sawyer is psychoanalyzing the boy. They have a huge fight and Kris strikes him. Sawyer turns it into a major crisis because he doesn’t want Mr. Macy to know what he was doing. They end up taking Kris to Bellevue Hospital. The doctor commits him because he deliberately flunks his psychiatric exam.

Kris’ commitment papers go to a judge to sign. Fred acts as his attorney and asks for a formal hearing. Kris is being committed to Bellevue, the oldest hospital in the country (1736). In the 1700s and 1800s Bellevue had a poorhouse, a lunatic asylum, a prison, an orphanage, and an infectious disease ward. Today we speak of mental illness with a completely different attitudes and words. In this film we see and hear the words still in use in the 1940s, insane, lunatic, crazy, demented. 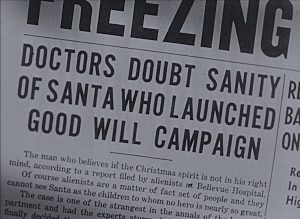 The judge in the lunacy hearing meets with his campaign manager (William Frawley, known as Fred on I Love Lucy and Uncle Bub on My Three Sons). The manager thinks the judge needs to be sick and get out of town because of the publicity on the case. His own grandchildren won’t hug him! 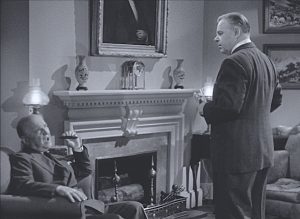 “Now, how about a great big kiss for Grandpa, hmm? –Humph! –Fine way to treat their grandfather! No hug, no kiss, no anything! –I don’t blame them. Any man who put Santa Claus on trial for lunacy… –Now, see what I mean? –Judge, children, wife, manager

The District Attorney’s son, Tommy, testifies that he got a Flexible Flyer sled from Santa Claus. The Flexible Flyer was patented in New Jersey in 1889. It was the sled of choice because you could steer it.

Suzy and Doris write Kris a letter to cheer him up and address it to “Kris Kringle / New York County Court House.” It turns out thousands of letters are being addressed that way and arriving at the Post Office. Fred uses this to give evidence that the US government was recognizing Kris as Santa Claus.

The US Post Office Department was founded in July 1775. Benjamin Franklin was the first Postmaster General. The US Postal Service is an independent agency since 1970.

“Faith is believing in things when common sense tells you not to.” –Doris 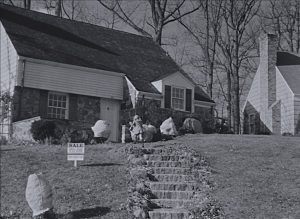 Go sit on Santa’s lap and tell him what you want for Christmas and enjoy Miracle on 34th Street this holiday season.