Things to do in San Francisco are abundant and amazing. This beautiful, historic city has many hills, views of ocean and bay, incredible architecture, and an amazing food scene. More on San Francisco in Part 1, Part 2, and Part 4!

The Palace Hotel is a San Francisco landmark on Market Street. The original hotel opened in 1875, with new versions in 1909 (after the fires of the 1906 earthquake), 1989, and 2015. The hotel is famous for its architecture, food (Green Goddess dressing was created here), and many famous guests (Edison, U. S. Grant, William McKinley, King David Kalakaua, Prince Philip, Enrico Caruso and many stage stars.) 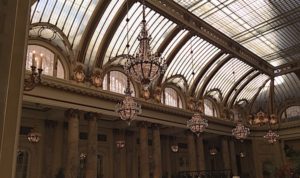 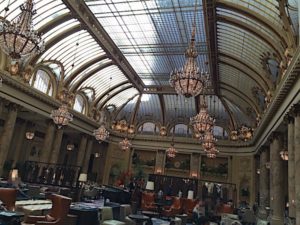 At the center of the hotel is the famous Garden Court with its glass ceiling, comfy chairs, and elegant lighting. I love the art of Maxfield Parrish, so I couldn’t miss spending time in the Pied Piper bar. The bar has a dark, clubby feel. The huge mural by Parrish takes center stage over the bar. The colors in it are beautiful, and as you sit there having an expertly made cocktail, you feel the eyes of the people of Hamelin looking directly at you. http://www.sfpalace.com/ 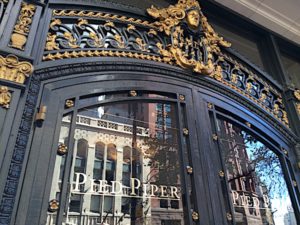 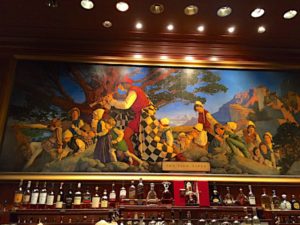 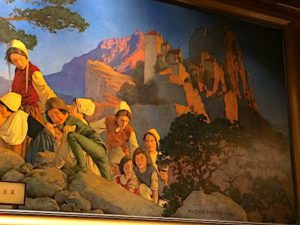 Lotta Crabtree was a famous entertainer in the second half of the 1800s. She was a child of the California Gold Rush mining towns and was encouraged to be an actress, dancer, and singer by Lola Montez. Lotta traveled the world and was the highest paid actress in the 1880s. She also gained fame as a philanthropist. She donated Lotta’s Fountain to the people of San Francisco in 1875. The fountain became a meeting point landmark in the stark aftermath of the 1906 earthquake. A commemoration is still held at the fountain in the early morning hours of April 18. http://broadway.cas.sc.edu/content/lotta-crabtree

Cable cars are a unique San Francisco thing to do, sadly today mostly for tourists. First introduced in 1873, the cable cars run on a huge steel cable that moves under the street by an engine in the power house. There is a grip on each car that goes below the car through a slit in a street and is used to grab and release the cable. There are two routes that begin on Powell Street near Market Street. If there are lots of tourists in town, your best bet to get on the cable car is to start here. You are allowed to board cars from marked stops along the routes by waving to the grip operator. However, if the car is packed, they will have no room for you! 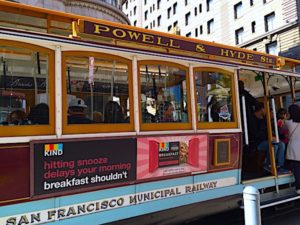 I suggest that you try a cable car ride once ($7 per person) to see if you want to keep using the cable car to get around. You can buy single tickets or passes for a day or longer at two Walgreens locations on Powell Street or see other locations. Many tourists are trying to get to Fisherman’s Wharf, the end of the line, so they don’t get off and it’s difficult to get the grip operator to stop. There are long lines at Fisherman’s Wharf to return to Union Square, especially if a cruise ship in dock! https://www.sfmta.com/getting-around/transit/how-ride/how-to-cable-cars

The Xanadu Gallery is a fine art gallery accessible through its website. It’s worth walking by its location because the building was designed by Frank Lloyd Wright. I really enjoyed trying to photograph the bricks laid in circular pattern. Be sure to view the website to see some of the interior. http://www.xanadugallery.us/sf.html 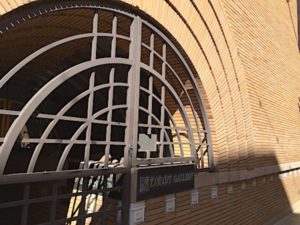 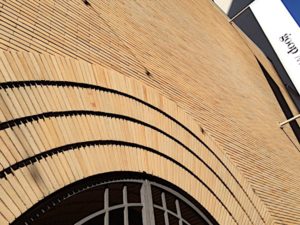 Neiman Marcus is on the former site of the City of Paris department store. It was a beautiful historic building and there was a public outcry when it was demolished. Fortunately, Neiman Marcus preserved the beautiful glass skylight and it now the centerpiece of the Rotunda restaurant and bar. Located on level 4, the Rotunda is accessible by escalator or elevator. It’s open from 11 am to 4 or 5 pm, be sure to check the website for hours. http://www.neimanmarcus.com/restaurants/san%20francisco/ca/the%20rotunda/san%20francisco 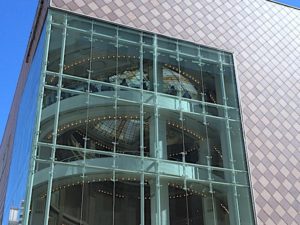 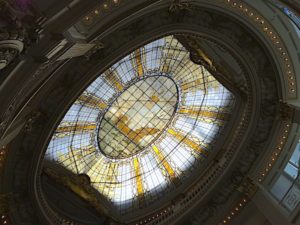 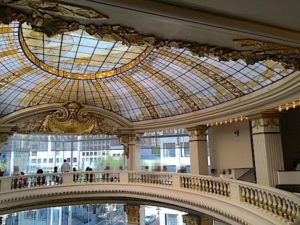 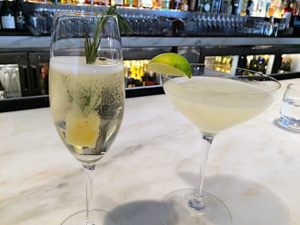 Union Square was used for rallies for the Union army during the Civil War. Built in 1850, Union Square has continued as a place for public gatherings and military events. In 1903 the Dewey Monument was added to remember the US Navy victory at Manila Bay, topped by a memorable statue of Victory. The palm trees and other landscaping is beautiful. The Union Square area has great shopping, hotels, art galleries, and restaurants. http://www.visitunionsquaresf.com/play/events#tiles 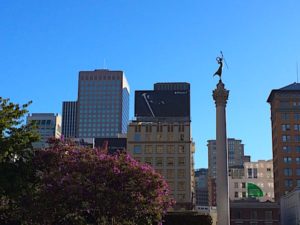 Sears Fine Food is a Union Square institution. For my family, it’s not a real trip to San Francisco without a breakfast at Sears. Sears Fine Food has an old fashioned vibe with lots of photos of celebrity visitors, excellent service, and antiques. They are famous for their Swedish pancakes which come as 18 two-inch cakes with ligonberry preserves as an option. Benedicts, omelets, waffles, and healthy choices are available. I love breakfast there, but they are open for lunch and dinner also! http://www.searsfinefood.com/history/

San Francisco is known for its hotels. When I go, I like to visit the lobbies, bars and restaurants because my parents had so many stories of living in the city as a young couple and getting great entertainment from people-watching in the hotels. The St. Francis Hotel is one of the great ones, on Powell Street facing Union Square. The Oak Room restaurant and the Clock Bar are two of the hotel’s beautiful venues. There’s an old phrase “Meet me at the clock at the St. Francis”, and if you like antiques you will want to see the old magneto clock. The lobby also has the Chateau Montelena tasting room. (Have you seen the Bottleshock movie?). Chateau Montelena dates from the 1880s in Napa Valley and is famous for their Chardonnay. http://westinstfrancis.com/hotel-features/history/ 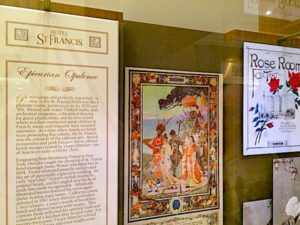 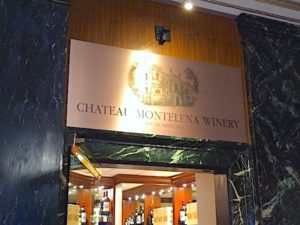 A smaller historic hotel a block off Union Square is the King George Hotel, built in 1914. This narrow city hotel has a single vintage elevator. The rooms are small but are decorated nicely and have historic touches. They are equipped with large, modern, multispeed ceiling fans. There are 3 diners on the same block as the hotel. http://www.kinggeorge.com/

Next time we go, I would love to visit the Cable Car Museum and see a play at the Geary Theater.

Map 9 things to do in San Francisco

Resource links for 9 things to do in San Francisco 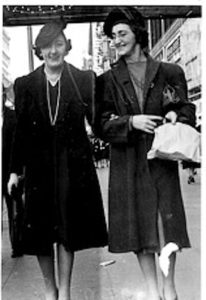 Fashionable San Francisco! My grandmother and her sister on Market Street.

My father and his brothers grew up in San Francisco, and my parents met and married there. Though I’ve never lived there, I get very nostalgic when I visit, thinking about the city’s interesting history. On this trip, I tried to find my grandparents’ graves in Colma and my father’s boyhood home. I wasn’t very successful, but many of the places they talked about are still very grand and lovely to visit.

Previous Post: « Magnet activities for STEM kids – and compasses
Next Post: Master and Commander: The Far Side of the World »